Spatial planning as a response to the climate crisis? Urban forms and sizes, and the carbon ‘carprint’ of households in France 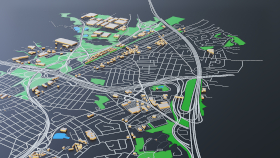 In the context of global warming, carbon dioxide (CO2) emissions generated by road transport are the object of increasing attention. This sector is currently the source of one quarter of all global CO2 emissions and it is responsible for fully half the growth of emissions since the signing of the 1990 Kyoto Protocol. In the European Union, it is the only sector whose emissions have not decreased since then.

A significant proportion of the pollution generated by road transport comes from car travel, whose emissions depend not only on the characteristics of households and their location choices but also on development policies implemented during eras when ecological concerns were not considered a priority. The fight against global warming thus also requires planning policies promoting more energy-saving urban forms.

In this article, Camille Blaudin de Thé, Benjamin Carantino and Miren Lafourcade study the impact of urban form and city size on fuel consumption and related the CO2 emissions. Using the INSEE studies “Budget des Familles” carried out in 2001 and 2006, they estimate that households living in peri-urban and rural zones consume on average 400 litres of fuel per annum more than inner-city households, all other things being equal. For instance, a car-owning household in Sarcelles, in the heart of Paris metropolis, emits half the car travel-generated CO2 of a similar household in Meaux, in the peri-urban band around the Ile-de-France.

Even if the carbon ‘carprint’ of households is indeed smaller in the most densely populated areas, a “sustainable” planning policy cannot be reduced to city compaction though. The authors show that very different urban forms can result in the same carbon footprint actually. Public transport systems, the functional diversity of jobs and even the morphology of buildings (a “fractal geometry” of urban spaces, for example, facilitates pedestrian mobility and multimodal transport), can also reduce car use, especially if they are combined. The range of public policies curbing car emissions down is thus larger than it first seems.

The authors also show that in France, unlike in the United States, city size does not have a linear effect on car emissions. In the largest spread-out conurbations, households pollute less with their cars (around two tonnes of CO2 per household per year in Paris), thanks to the intensive use of public transport and the functional diversity of jobs. In small cities, low densities are compensated for by shorter travel-to-work distances and a greater centralisation of jobs and housing. On the other hand, in medium-cities (of around 100,000 inhabitants), that do not benefit from these two mechanisms the carbon ‘carprint’ of households is much greater. Population growth being particularly marked in these cities, spatial policies aimed specifically at them could be required.

In France, where the use of eco-taxes aimed at reducing transport emissions faces serious political difficulties, as the recent “yellow vests” turnmoil reminds us, urban development policies constitute a double lever for action, as yet little used, to meet the urgent climate challenge: along with a given tax policy, they reduce the consumption of fuel associated with polluting urban forms inherited from the past, and in so doing facilitate the acceptance of a carbon tax among the inhabitants of such spaces.