Income and earnings inequality in Great Britain: the Gini coefficient, 1978 to 2009

Short link to this article : http://bit.ly/2bLBUEY 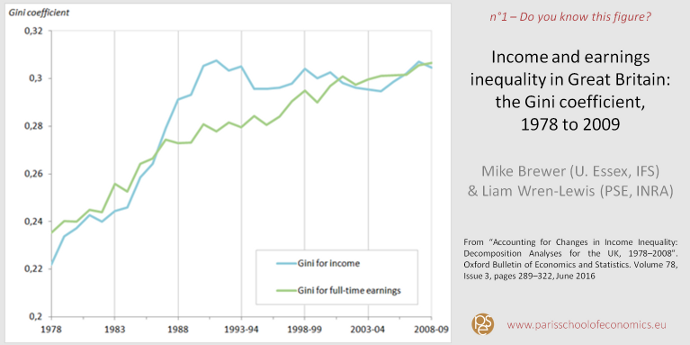 The figure plots how two types of inequality have evolved in Great Britain. From 1978 to 1991, Household income* inequality (blue line) rose from that of a relatively average developed country, with a Gini coefficient** of 0.23, to being amongst the most unequal countries in the OECD, with a Gini coefficient over 0.3. Since 1991, it has stabilized around 0.3. Individual earnings inequality (green line) amongst full-time workers rose fairly steadily over the period. What explains the difference between these trends?

Mike Brewer and Liam Wren-Lewis investigated specifically the question “why did income inequality in the UK rise very rapidly but then remain flat thereafter?” (blue line), seeking to distinguish between two broad hypotheses: was it the case that those factors which drove the rise in income inequality between 1978 and 1991 were specific to that period? Or was it that the factors behind the pre-1991 rise in inequality have continued, but have been offset by new factors pulling inequality downwards? To answer these questions, they constructed annual, cross-sectional microdata with consistent measures of income and household characteristics spanning 1978 to 2008/09, and used three complementary decompositions techniques.

Going forward, one point of concern may be that at least two of these four factors are unlikely to continue pushing inequality down from 2008-09 onwards. Unemployment has rapidly increased since 2008 and in the medium term is unlikely to move below the low achieved during the 2000s. Meanwhile, recent changes to the benefit regime are likely to further increase inequality. Future movements in net earnings inequality are therefore likely to become central to the trend in income inequality.