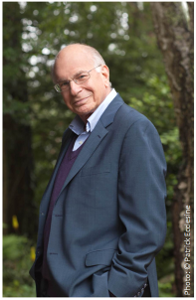 In their recent book, Thaler and Sunstein presented the competing images of the Econ and the Human. The Econ is the rational and selfish agent assumed in economic theory. Humans are people as they are, and they are quite different from Econs. One of the main differences is that Econs make judgments and decisions that are consistent, stable and governed by a broad view of the situation, which includes the anticipated future. Humans are different along all these dimensions. The talk will present a view of the Human mind, and examine some of the consequences of this view for economics and for policy...................................10 am – Welcome address, Daniel Cohen10.15 am – Daniel Kahneman’s lecture11.30 am – Questions & Answers12.15 am – Book dedication “Les deux systèmes de la pensée”, newly released in French (Flammarion, sept. 2012)..................................Professor Kahneman’s personal page: http://www.princeton.edu/ kahneman/Daniel Kahneman is Eugene Higgins Professor of Psychology and Professor of Public Affairs Emeritus at Princeton. He was educated at The Hebrew University (Jerusalem) and obtained his PhD in Berkeley. He taught at The Hebrew University, at the University of British Columbia and at Berkeley, and joined the Princeton faculty in 1994, retiring in 2007. Over a wide-ranging research career he has been involved in many fields of psychology, ranging from vision and attention to the study of juror behavior and the measurement of well-being. He is best known for his contributions, with his late colleague Amos Tversky, to the psychology of judgment and decision making, which inspired the development of behavioral economics. This work earned Kahneman the Nobel Prize in Economics in 2002 and other honors, including honorary degrees from several Bodies and Universities. He was instrumental in establishing the teaching of Psychology as a core discipline in the Woodrow Wilson School for Public and International Affairs at Princeton. Kahneman’s recent book “Thinking, Fast and Slow” is a best-seller in several countries, including the US, UK, Germany and China.