The International Macroeconomics Chair has the pleasure to invite you to a lecture given by Philip R. Lane (European Central Bank) on March 31, 2022. The lecture will be held at PSE - Paris School of Economics and will be broadcast online (Zoom). 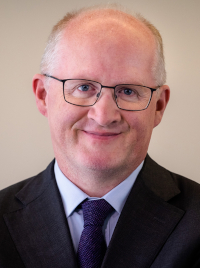 Philip R. Lane joined the European Central Bank as a Member of the Executive Board in 2019. He is responsible for the Directorate General Economics and the Directorate General Monetary Policy. Before joining the ECB, he was the Governor of the Central Bank of Ireland. He has also chaired the Advisory Scientific Committee and Advisory Technical Committee of the European Systemic Risk Board and was Whately Professor of Political Economy at Trinity College Dublin. He is also a research fellow at the Centre for Economic Policy Research. A graduate of Trinity College Dublin, he was awarded a PhD in Economics from Harvard University in 1995 and was Assistant Professor of Economics and International Affairs at Columbia University from 1995 to 1997, before returning to Dublin. In 2001 he was the inaugural recipient of the Bernácer Prize for outstanding contributions to European monetary economics.