May 22 - invitation: Adam Tooze’s conference at PSE on his latest book

Please note that this conference will be entirely held in English

Shelby Cullom Davis chair of History at Columbia University and Director of the European Institute. https://adamtooze.com/

This conference is a presentation of his new book:

“Crashed: How a Decade of Financial Crises Changed the World” 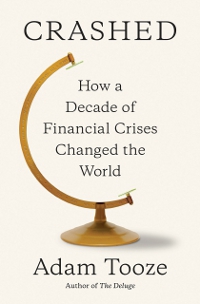 Viking Publishing - In September 2008 the Great Financial Crisis, triggered by the collapse of Lehman brothers, shook the world. A decade later its spectre still haunts us. As the appalling scope and scale of the crash was revealed, the financial institutions that had symbolized the West’s triumph since the end of the Cold War, seemed – through greed, malice and incompetence – to be about to bring the entire system to its knees. Crashed is an original analysis of what happened and how we were rescued from something even worse – but at a price which continues to undermine democracy across Europe and the United States. Go to the editor website

This intervention will be followed by a discussion, chaired by Eric Monnet (PSE-Banque de France) with Agnès Bénassy Quéré (PSE-Paris 1) and Thomas Piketty (PSE-EHESS)

Adam Tooze teaches and researches widely in the fields of twentieth-century and contemporary history. From a start in modern German history with a special focus on the history of economics and economic history his interests have widened to take in a range of themes in political, intellectual and military history, across a canvass stretching from Europe across the Atlantic. His previous books include Statistics and the German State: the Making of Modern Economic Knowledge (2001), Wages of Destruction: the Making and Breaking of the Nazi Economy (2006), and Deluge: The Great War and the Remaking of the Global Order 1916-1931 (2014). For these books Adam won the Leverhulme prize fellowship, the H-Soz-Kult Historisches Buch Prize, the Longman History Today Prize, the Wolfson Prize and the LA Times History Prize. He was shortlisted for the Kirkus review, Duff Cooper and Hessel Tiltman prize and his books have featured in the book of the year lists of the Financial Times, LA Times, Kirkus Review, Foreign Affairs, and The Economist. https://adamtooze.com/