(PSE Visitor) Nora Lustig: “30 years ago, Inequality was in the fringes. Now, concern about Inequality is everywhere” 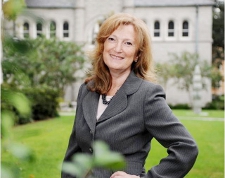 Nora Lustig – Samuel Z. Stone Professor of Latin American Economics and Director of the Commitment to Equity Institute (CEQ) at Tulane University, and nonresident Senior Fellow of the Center for Global Development and the Inter-American Dialogue – PSE Visitor in May and June 2018

Your personal history tells us a lot about your career: did studying inequality always seem obvious? Nora: When my family migrated from Argentina to the USA, the gap in living standards between the two countries struck me deeply. A few years later, as a PhD student at UC Berkeley, it became clear to me that I wanted to “do” something about that. With Albert Fishlow and Alain de Janvry in my thesis committee, the path to development economics and inequality took shape.

Which key changes have you witnessed in the academic and institutional fields in the last decades? With notable exceptions such as PSE distinguished professors Anthony Atkinson and François Bourguignon, thirty years ago inequality was not a topic in mainstream academia. This has changed radically. Influential research groups such as the World Inequality Lab at PSE and the Center for Equitable Growth at UC Berkeley are widely recognized and are able to attract top students from around the globe. The causes of inequality are so complex that it is great news that much more research is being done.

In most international institutions, while being concerned with poverty was widely accepted, inequality was almost a “taboo” subject. Now, inequality is everywhere in the organizations’ agendas. I’ve had the chance to work in the Inter-American Development Bank (IADB), UNDP, and the World Bank (WB) and, thus, I have been able to witness this sweeping change first-hand. To the extent of my modest possibilities, I tried to contribute to this shift. For instance, in the late 1990s, I persuaded the IADB to call my unit the Poverty and Inequality Unit to indicate that we would do research and policy analysis in both. As one of the lead authors of the WB World Development Report 2000/1 (1) I made sure we covered prominently income, ethnic, social, and gender inequalities in the report.

How has your own research contributed to understanding the dynamics of inequality and policies to curb it? My curiosity about the causes of inequality and poverty and my drive to find solutions have been at the core of my work. During most of my career, I focused on Latin America, the most unequal region in the world. I have relentlessly pushed to include distributional concerns in debates which used to be dominated by macroeconomic concerns (2). My most recent book, analyzed which factors explain the unusual and systematic decline in inequality in Latin America in the 2000s (3).

Since 2009, I’ve been directing the Commitment to Equity Institute (4) which works to reduce inequality and poverty through comprehensive tax and benefit incidence analysis and active engagement with the policy community (5). As the World Inequality Lab here at PSE, we publish academic papers and develop a unique open source database on fiscal redistribution. We’re working with many institutions, helping them to pursue their own equity objectives: World Bank, IMF, and OECD. We also work with Oxfam International and have just started to collaborate with the Agence Française de Developpement.

You’re staying 2 months here, and you’re already planning to come back right? For me, PSE is like an academic paradise! There are so many people working in the fields I am interested in. I have worked with François Bourguignon for decades. Thomas Piketty and his team—in particular, Facundo Alvaredo—focus on topics that overlap with mine in very fruitful ways. Between the seminars, the individual meetings, the workshops -such as the one co-organized by the WIL, the CEQ Institute and the SCSEI (see picture) — time is flying! Before my arrival, I was already doing research with numerous PSE economists. During this visit (this is my second year), these professional links have grown stronger and new ones have been created. Hopefully, I will be able to come next year to present work on distributional national accounts for Mexico and the social state in Latin America. I also would like to explore how the IPP micro simulation models could be applied within the CEQ Institute’s fiscal incidence framework.