Dedicated page on the publisher’s site 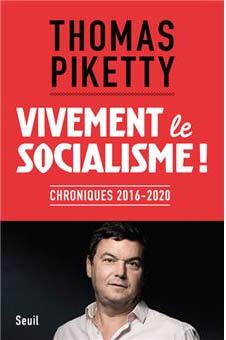 “If I had been told in 1990 that in 2020 I would publish a collection of columns entitled ’Vivement le socialisme!”I thought it was a bad joke. When I was eighteen years old, I had just spent the fall of 1989 listening on the radio to the collapse of communist dictatorships and “real socialism” in Eastern Europe. But here it is: thirty years later, in 2020, hyper-capitalism has gone much too far, and I am now convinced that we must think about a new overcoming of capitalism, a new form of socialism, participatory and decentralized, federal and democratic, ecological, mixed and feminist. History will decide whether the word “socialism” is definitely dead and needs to be replaced. For my part, I believe that it can be saved, and even that it remains the most suitable term to designate the idea of an economic system alternative to capitalism. In any case, one cannot be satisfied with being “against” capitalism or neoliberalism: one must also and above all be “for” something else, which requires precisely designating the ideal economic system that ’we want to set up the right company that we have in mind, whatever name we ultimately decide to give it. It has become common to say that the current capitalist system has no future, as it deepens inequalities and depletes the planet. This is not wrong, except that in the absence of a clearly articulated alternative, the current system still has a long way to go. […] ”. Preceded by an unpublished preface, supplemented by graphics, tables and additional texts, this collection includes all the monthly chronicles published by Thomas Piketty in Le Monde from September 2016 to July 2020.

Thomas Piketty is an economist, director of studies at the Ecole des Hautes Etudes en Sciences Sociales (EHESS) and PSE Chaired Professor at Paris School of Economics (PSE). He has published numerous research articles in international journals such as the Quarterly Journal of Economics, Journal of Political Economy, American Economic Review, Review of Economic Studies, Explorations in Economic History, Annales: Histoire, Sciences Sociales, as well as a ten books. He is the author of historical and theoretical works devoted to the relationship between economic development, distribution of wealth and political conflict. This work has led to highlighting the importance of political, social and fiscal institutions in the historical dynamics of the distribution of wealth. Thomas Piketty is also co-director of the World Inequality Lab and the World Inequality Database, and one of the initiators of the Manifesto for the Democratization of Europe. He is the author of the international bestseller “Capital in the 21st Century” (2013) and “Capital et ideologie” (2019).