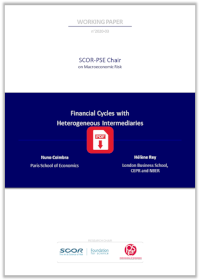 Executive SummaryIn the aftermath of the great financial crisis, the question of excessive risk-taking by banks and other financial intermediaries became very important in the minds of policy makers and academics alike. Understanding its causes and origins is essential in designing adequate regulations, since risk is also a fundamental and inherent aspect of the financial sector. One important concern is understanding whether monetary policy affects risk-taking in the financial sector and also when and how the two are linked. Did the period of historically low rates before the crisis worsen financial stability? Is the current low interest rate environment also leading to the build-up of systemic risk? 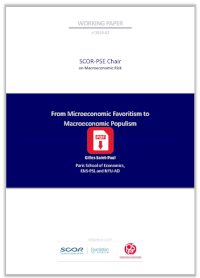 By Gilles Saint-Paul (Paris School of Economics, ENS-PSL and NYU-AD)

Executive SummaryWhy would people support macroeconomic policies that are likely to lead to sovereign crises, balance of payments crises, and the like? A rational explanation is based on favoritism – an institutional feature of society implying that some social groups have better access to public goods than others. A favored group that bears a low fraction of the costs of a crisis but benefits in the short-run from unsound policies is likely to support fiscal indiscipline. This paper formalizes the role of favoritism for public spending, indebtedness, and crisis in an illustrative model based on Saint-Paul et al. (2017), and studies support for political parties implementing it, so-called «populists». It argues that favoritism shaped the recent history of French pension reforms and confirms its effect on macroeconomic policy across a panel of countries. 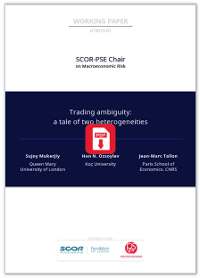 Two heterogeneities are key: First, the heterogeneity in the uncertainty about the mean of an asset’s return distribution. This uncertainty parameter encapsulates the ambiguity of assets. It is high, for example, for stock returns of new-technology companies whose risks have not yet been fully learned. Second, investors differ, additionally to their risk aversion, in their tolerance for ambiguity. Together, these heterogeneities give rise to a parsimonious extension of the standard mean-variance framework (referred to as robust mean-variance) in which investors face a three-way trade-off between expected return, variance, and ambiguity. The paper considers, in turn, the implications for portfolio choice, equilibrium prices and returns, and trade upon the arrival of public information.

Turning to equilibrium prices, the authors show that despite the failure of the mutual funds theorem, a single-factor pricing formula emerges. As in the standard consumption asset pricing model (CAPM), the single factor is the excess return of the market portfolio. However, the CAPM beta is adjusted by the extent to which the ambiguity of the asset return is correlated with the ambiguity of the market portfolio. Two uncertainty premia explain the cross-section of expected returns: a risk premium and an ambiguity premium. The latter has the potential to explain the size and value premia documented by Fama and French (1992, 1993). High book-to-market firms, which tend to be in financial distress, and small-cap firms, due to their over-reliance on external financing, likely carry a high ambiguity premium.