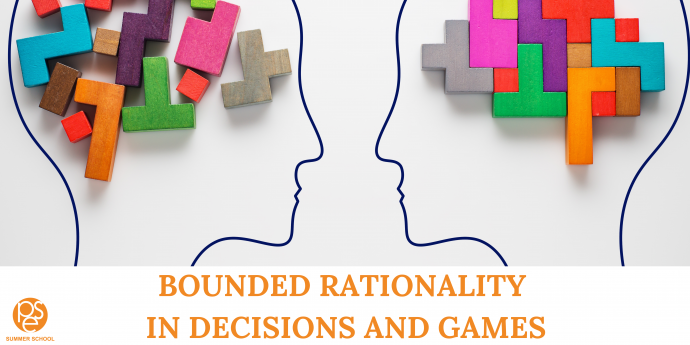 This PSE summer school presents topics in behavioural game theory, bounded rationality and decision theory. It is motivated by the desire to move beyond the standard paradigm with rational expectations and expected utility theory, and present the implications of this for the understanding of economic phenomena sometimes viewed as paradoxical in the standard paradigm.

Workshop : present your paper Participants will have the opportunity to submit a paper to be presented within this programme. The three selected papers will be presented in front of participants and faculty in a slot reserved for such presentations.

Overview The Bayesian paradigm used in economic modelling often assumes that agents behave optimally as if they knew all details of the model (preferences, distributions etc). In this mini-course, we explore how strategy restrictions can help assess the robustness of models that use the Bayesian assumption, and also how these strategy restrictions, viewed as a family of available heuristics, can be used as a modelling device to limit the sophistication of the agents we model, including analyzing agents with differentiated levels of sophistication or different ways agents would frame their own environment. Recent work in this vein will be presented, as well as an analysis of how this line of research departs from other work in the bounded rationality literature.

Overview The goal of this course is to offer an introduction to the branch of behavioral game theory (BGT) based on bounded rationality (as opposed to, e.g., social preferences). We first motivate BGT by reviewing classic experiments that document deviations from Nash equilibrium in simple games of complete information. We discuss alternative concepts that can explain these anomalies, emphasizing how such models are commonly used in the analysis of experimental data. We then consider games with incomplete information and study models in which players neglect correlation between variables or misperceive their strategic environment. Finally, we consider concepts for multi-stage games in which players use simplified strategies that can be implemented by algorithms or “automata”.

Osborne, M. and A. Rubinstein (2003), « Sampling Equilibrium, with an Application to Strategic Voting », Games and Economic Behavior.

Overview The goal of this course is to expose students with a game theoretic model developed over the last twenty years that aims at relaxing the degree of fineness with which economic agents understand the reaction of their environment. The course will present the basics of the analogy-based expectation equilibrium as initially introduced in Jehiel (2005) as well as various applications covering bargaining, cooperation, investment strategy among others. At the end of the course, students should be equipped to apply the approach to whatever field of interest.

Jehiel P, (2022), « Analogy-based expectation equilibrium and related concepts : Theory, applications, and beyond », prepared for the World Congress of the Econometric Society 2020.

Overview Invoking probabilities when thinking about an uncertain future is rather common and yet, coming up with probabilistic representations on the one hand and using probabilities to take decisions on the other hand is extremely complex. In this mini-course, we will explore recent approaches to these issues, focusing on so-called “ambiguity” models.

Handbook of Economics of Risk and Uncertainty, Machina and Viscusi (ed), North Holland, 2014.