Short link to this article : http://bit.ly/1TzmIrZ 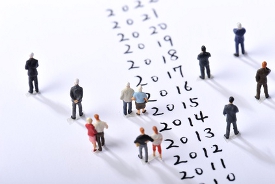 Economists have long linked population size with economic development in order to underscore, following a Malthusian hunch, that an overly large population can damage economic development. The questions of non-renewable natural resources and climate change have brought this line of thought back into fashion. The recent report from the Groupe d’experts intergouvernemental sur l’évolution du climat (GIEC) stresses the importance of taking into account population size changes in the evaluation of climate policies. It states that this raises important ethical questions (1), especially that of knowing whether it is better to have a greater population but poorer, or a smaller but richer population. These ethical questions have been studied in philosophy and in economic theory under the name “population ethics”: in an abstract framework that considers all possible allocation of resources and all imaginable sizes of population, the implications of particular ethical frameworks are considered.

Population ethics has been approached principally from a utilitarian perspective, which accords no different priority to individuals on the basis of their place on the spectrum of living standards. This perspective has produced results that can be considered problematic, such as the “revolting conclusion” that for each rich and numerous population, there is one more numerous but extremely poor, which is desirable: thus, policies encouraging fertility should be preferred.

In this article, Stéphane Zuber considers a framework that gives greater priority to individuals who are relatively poor. By according more weight to the poorest people, his perspective privileges the addition of future generations with a higher standard of living than existing generations, favouring a sustainable dynamic. The author brings to light trade-offs between population size and living standards less extreme than in the utilitarian framework, and a modification of the effect of population growth in terms of the relative wealth of the new generations. The latter can be more numerous if they are less poor, whereas risking their living standards could lead to restricted population growth.