Home > Economics for everybody > Archives > 5 papers...in 5 minutes ! > April 2017 > A network-based approach to technology transfers in the context of climate (...)

Short link to this article : http://bit.ly/2oTdIXn 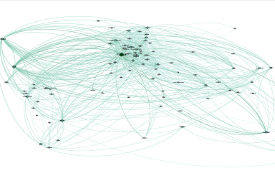 In the recent Paris climate agreement (COP21), the role of the dissemination of technologies in the mitigation of climate change was given much attention. Despite the will shown, our understanding of the ways in which technology is disseminated on a global scale and the possible means of accelerating this process are rather limited. This is explained in part by a lack of detailed data about technology transfer over the long term and on a global scale. Another major challenge is that technology dissemination networks are largely unobservable. Most empirical studies of the adoption and transfer of technologies consider bilateral transfers (1), treated independently for each country-to-country relationship. Thus, the role of direct and indirect connections in the global dissemination of technology has rarely been taken into account. Nevertheless, these networks can have a fundamental influence on that dissemination. For example, a country might not be, quantitatively speaking, the source of or the most important outlet of a new technology yet it can play a central role as a “hub” in its dissemination.

In this article, Halleck Vega and Mandel offer a methodology for deducing technological dissemination. They apply the methodology to wind energy, a major technology in the transition to renewable energy. In order to do so, they use a database of all the windmill turbines installed in the world since 1983. After extracting precise information about the technologies used, they reconstitute the process of the dissemination of successive generations of windmills, characterised mainly by the growing size of the turbines. Employing data methods initially developed in order to reconstruct social networks, based on observations of the propagation of memes, and using installation data, they deduce likely technology diffusion networks. These networks, represented in the graphic below (showing the example of windmills), can be read as maps illustrating the paths along which technology spreads, and their development over time. With these maps, we can also quantify the structural properties of a network, and identify the country or groups of countries that play significant roles as sources or intermediaries in the dissemination. From the point of view of climate policy, the maps can be used to determine effective strategies of technology transfer, and study the impact of commercial and environmental agreements on them. Halleck Vega and Mandel are currently collecting data that will allow them to extend their approach to a large number of technologies, from solar energy to the steel industry and cement production. Their aim is to evaluate the global contribution of technology transfer to mitigating climate change.

(1) That is, between two countries.

………………..Original title: A network-based approach to technology transfers in the context of climate policyPublished in: CES Working paper 2017.09 Available at: https://halshs.archives-ouvertes.fr/halshs-01483963/document