Why do we spend less and less time cooking?

Short link to this article: https://bit.ly/2PEqKZI 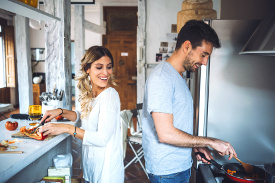 According to INSEE’s “Emploi du Temps” (Time use) studies, the time that French households spend cooking at home went down from 71 minutes per day in 1985 to 61 minutes in 2010. When we look specifically at the women in couples, who were and still are principally responsible for household chores, the reduction is even more marked: the time they spend cooking has fallen from 69 minutes per day in 1985 to 55 minutes per day in 2010. Three key factors explain this decline. First, women have access to better-paid employment, which can lead to them investing more time in their careers and spending less time preparing meals: they can choose to work more and to have more frequent recourse to ready-made meals, caterers, or going to restaurants. Second, cooking technologies and ready-to-use foods have spread through households. Robots, microwave ovens, pre-cooked foods, pre-washed and pre-chopped vegetables save time in meal preparation. Finally, it may be that the traditional social norm of the family meal, of which an important symbolic element was its preparation by women, has weakened. Identifying the respective roles of these different factors is crucial in the design of public policies to promote healthy eating. Indeed, these policies often rest, rightly or wrongly, on the assumption that a return to traditional cooking would promote better diets, with benefits for public health.

The authors study these diverse mechanisms in two recently-published articles, one in economics, the other in sociology. They show that the increase in participation in the labour market by women in couples, and in their wages, account for 60 per cent of the reduction of their time spent cooking. However, women who work choose to do so according to unobserved factors –– such as the relative preference for paid work over domestic work ––which also has a direct impact on the decision to cook less. When we take into account the specific effect of these unobserved factors, only 20 per cent of the decline in time spent cooking between 1985 and 2010 is explained by the changes in labour market opportunities available to women. The 40 per cent differential results, then, in part from preferences that favour paid work over cooking and other domestic tasks. Does this mean that the traditional norm of the family meal has become weaker? Research comparing French and American “Time use” studies shows that the positive relation between frequency of meals at home and time spent cooking at home did not diminish in France between 1985 and 2010 while it greatly declined in the United States. Thus, the social norm of the family meal cooked at home has resisted changes in the labour market in France –– even if in France as in the US more and more meals are taken outside the home. Finally, our authors’ results suggest that the spread of cooking technologies, associated with a reduction in time spent cooking, could explain this resistance. In sum, the preservation of the traditional family meal and the promotion of healthy eating should be supported by policies that promote technological innovations to reduce time spent cooking, while regulating more strictly the sanitary and nutritional qualities of foods that are processed, ready to eat or to reheat.

Original title of the article: 1. “Women’s Employment and The Decline of Home Cooking: Evidence from France, 1985-2010” 2. “Is cooking still a part of our eating practices? Analysing the decline of a practice with time-use surveys”