Home > Economics for everybody > Archives > “A word from” > Gilles Postel-Vinay: “The system of peer-to-peer loans that we highlight (...)

Gilles Postel-Vinay: “The system of peer-to-peer loans that we highlight represents a credit activity of a scale not previously unimagined between the 18th and 20th centuries”

In 2001, the book “Des marchés sans prix. Une économie politique du crédit à Paris, 1660-1870” (1) was published by Éditions de l’EHESS, in which Philip T. Hoffman, Gilles Postel-Vinay and Jean-Laurent Rosenthal analyse how credit institutions functioned in Paris between 1660 and 1870. In January 2019, they published “Dark Matter Credit: The Development of Peer-to-Peer Lending and Banking in France” with Princeton University Press. Gilles Postel-Vinay talks about this work in an interview with PSE: 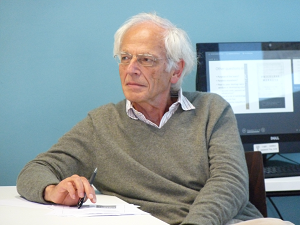 “Dark Matter Credit”: could you explain the title and the origin of your book?

The book arose out of the difficulties created by a historiography which we had to revisit “against the grain”. It is usual to represent growth in Europe in the 18th and 19th centuries as a finance-driven process, in which banks played a central role because they assembled the necessary resources. The hypothesis seemed even more convincing because it could point to the English experience, characterised by the early development of banks, in a political context favourable to a reduction in interest rates. However, this long-held consensus raised many questions. In our previous book - Priceless markets (2000) / Des marchés sans prix (2001) – we showed that in 18th century Paris, there was a very rapid expansion in credit activity that was independent of the banks and, furthermore, in which the interest rate played no role.

But how generalisable was this Paris model? That was the question we sought to answer when we began the (long) enquiry that led to the new book which, this time, deals with credit in the whole of France from the 18th century to the beginning of the 20th century. Since we found a situation that closely resembled that of Paris in the 18th century, we thought for a while of naming the new book “Priceless Markets 2 / Des marchés sans prix 2”. Then, it seemed to us that we should first stress the volume of credit activity outside of banking credit in order to analyse how these different types of credit coexisted. From there, we arrived at the final book title; to evoke the role of non-bank credit we use the image of black matter: that which is not directly visible but is no lesser part of the universe for all that.

What was the point of departure for your research on this theme?

I think that “Dark Matter Credit” and “Priceless markets” have in common a double point of departure. The first comes, as is often the case, from historical experience. We have known for a long time about non-banking credit in preindustrial Europe, which was considered as an archaism (harmful, but residual) whose existence must tend to disappear in the modern era. It seemed legitimate then to seek a better understanding by measuring it over the long period and to investigating how it functioned. Simultaneously, the available means for analysis were in the process of changing, which was the second element in the beginning of our research. Information economics, when we start working on it, opened a whole range of new approaches. So, we began with the anachronism inherent in the work of an historian who brings foreign categories into the past. In addition, our contemporary context plays a role: the current functioning of IT platforms has no doubt helped us to understand the success of these unexpected intermediaries – notaries public – whose central role we have discovered in the introduction and spectacular development of a credit system that has been around for two centuries. We thus formulated and tested some hypotheses about the ways in which information asymmetries were overcome through modalities other than those available to the banks.

How did you go about imagining these alternatives?

We had in mind the case of Paris where, as we have seen, since the 18th century, notaries public used precise information that they had about their clients to put lenders in touch with borrowers seeking loans, people whose reliability they could guarantee. Expanding the study beyond the capital city might seem logical, in fact, since it is common to link the development of financial markets with organisations that centralise their resources – big banks and stock exchanges. But we thought that maybe we should instead take up two scenarios suggested by economic geography: if transaction costs are high then the economic activity stays close to the consumer (the case of hairdressers); if not, then it tends to concentrate in one place (the case of the automobile in Detroit) or in some places (stock exchanges). The credit that we observed followed neither of these models. Contrary to stock exchange transactions, the loans were not concentrated in one place; and contrary to haircuts, they were not done on the corner of the street. We are talking about credit whose centralisation was partial or incomplete. Towards the middle of the 18th century for example, loans were spread over the country and 80% of borrowers lived in parishes of fewer than 5,000 inhabitants; but lenders and borrowers were far from being neighbours. Usually, they were known only to a single intermediary, the notary public, who put them in contact.

So, the system of peer-to-peer loans was already well established in the 18th century, long before the massive development of banking networks. How was it organised?

The system that our work highlights included credit activity on a scale that we had not imagined. From the 18th century to the First World War, the astounding total of these kinds of loan represented on average between one fifth and one quarter of GDP and touched one third of households. The transactions depended on information about the guarantees that only the notaries public held. The loans were thus organised within offices. However, they were not necessarily restricted to the clientele of each notary public. Information circulated among offices; not in an undifferentiated manner, but each notary public created a group whose members were at one and the same time supervisors and partners. What mattered was not the price of credit (the loans being generally subject to the same rate) but the capacity of the intermediary to provide certain information to the lenders, the borrowers and where appropriate, the offices with which he collaborated.

For a long time, no-one had any competing information. While the state of the ancien regime dreamed of it and the Revolution set it as a goal, almost another century passed before a public information system about loans was properly established. In its absence, banks confined themselves to other, highly diverse credit activities (commercial and industrial) but principally short term and concentrated in towns.

What conclusion can we draw from your observations on the role and development of banking networks?

That is no easy question… Among the many possible responses, I’ll give two.

The first is retrospective. Situating banks as a component of a larger ensemble – as we have done in this book – means that we can better understand their activities and their clientele. Studying the banks of the east coast of the USA in the 19th century, Naomi Lamoreaux stressed, in a classic work, the practice of “insider lending” (2). Beyond that particular case, historically, banks have addressed themselves to a relatively limited range of clients and in comparison, the type of credit that we have analysed concerns a broader public.

Conversely, the second response is prospective. I indicated that, far from seeing bank credit as competing with notarial credit, a certain division of labour was established between these two types of credit; one was oriented towards the long to medium term, on the basis of real estate security, the other towards mostly short-term transactions. Today, the question can be put again – and coexistence be less peaceful or pacified – between banking credit and individual (peer-to-peer) credit mediated by platforms that are not limited by the same constraints that weighed on the notaries public (who could never be in a position of local monopoly because since the Revolution, there were always at least two per canton...)