Home > Economics for everybody > Archives > “A word from” > Thomas Piketty: “The crisis we are going through is a profound challenge to (...)

Thomas Piketty: “The crisis we are going through is a profound challenge to every national model” 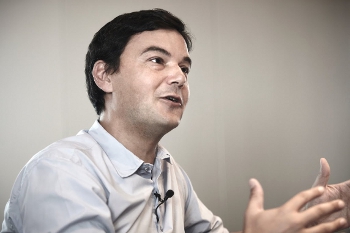 Most of the large economic zones have raised their heads and regained a growth rate similar to that of before the 2008 crisis. Except Europe. Everything is happening as if we can no longer identify our real strengths – and our real weaknesses. For example, the European public debts are a non-problem in the context of modern history, or in comparison with other regions ; contrary to the now deeply-entrenched collective fantasy, these debts belong to Europeans themselves: our economies hold more assets abroad than foreign entities hold in Europe. And as private wealth is thriving, we have our fate in our own hands: this is why I particularly support the idea of a progressive wealth tax. For all these reasons, and unlike inflation (too unjust for small asset-holders) and austerity (too slow and puts future growth at risk), which are other means of reducing public indebtedness, this policy tool responds in a way that is modern, transparent and fair given our current constraints.The corporations tax is another example. We have in Europe almost twenty different tax structures, which are de facto in competition with each other. In the end, we have a total level of tax on businesses in Europe that is lower than it is in the United States: is this a conscious choice ? Is this even a well-known fact about our economy? I don’t think so and the tax schemes revealed by “Luxleaks” are proof of that. We need to come to grips with this problem and I propose, among other things, that a full mandate be given to a European assembly made up of national deputies to deal with different economic subjects such as stimulus measures and deficit levels – and in the first place, a unified business taxation scheme. To have renounced our monetary sovereignty without creating new spaces of economic sovereignty was a blunder, but history teaches us that political will can shift horizons very quickly.Europe and France have considerable resources for succeeding in the world of today and tomorrow: one must be highly gifted to predict the future, but heavy investment in training, education (at all levels, including primary, secondary and tertiary), research and health, would certainly put us in the best position for the decades to come.