Short link for this article: http://bit.ly/1ORO1NV 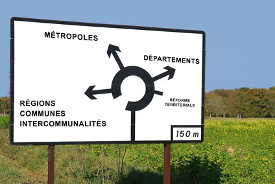 Two concurrent phenomena characterise the evolution of local public finances in industrialised countries over the past twenty years: increased citizen mobility (between towns, regions and countries) and a trend towards decentralisation in public decision-making, increasingly often made at the local level, closer to the citizen. At the same time, some countries (including the Scandinavian countries) have recently decided to reverse that trend and recentralise some public decisions. The optimal scale for the supply of public goods – whether national, regional or local – is the subject of the 1972 “Oates decentralisation theorem”, a cornerstone of the theory of fiscal federalism. According to Oates, a public good should be supplied at the local level when the local preferences of the citizens are very heterogeneous, and at the national level when the externalities between jurisdictions are very significant. The Oates theorem supposes that citizens are attached, administratively and affectively, to their jurisdictions (1). It is important, then, to analyse the pertinence of Oates’ conclusion when citizens are free to move between jurisdictions.

In this article, Francis Bloch and Unal Zenginobuz investigate a theoretical model in which citizens can, at a middling psychological cost, move between jurisdictions according to the provision of local public goods. The model combines the analysis of Oates’ fiscal federalism and Tiebout’s principle of mobility between jurisdictions. The analysis is based on two essential parameters: the degree of imperfection of the mobility and the extent of the externalities. Decentralisation is optimal when the volume of externalities is low and mobility less perfect. In a regime of decentralisation, competition between local jurisdictions leads them to fix the same taxation rate, which is as low as the cost of mobility. This leads to relatively low levels of public goods and general well-being. In contrast, the supply of public goods in a centralised regime is higher. In the end, the State might have an interest in recentralising local public goods.

(1) Externalities between jurisdictions appear when the inhabitants of one jurisdiction can benefit from a public good (for example an airport or a theatre) funded by another jurisdiction.