The Banque de France - PSE Chair is pleased to invite you to a policy panel online (Webex) on the launch of the 23rd Geneva Report on the World Economy:

The monetary-fiscal policy mix strikes back - which lessons for Europe? 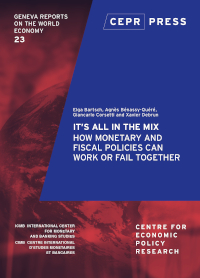 To recover from the COVID-19 pandemic, Europe is in urgent need of expansionary macroeconomic policies. At the same time, unprecedented levels of public debt reduce the scope for fiscal expansion, and nominal interest rates close to zero make traditional monetary policy inoperative. How can macroeconomic policies contribute to bringing Europe back to a path of sustained and stable growth? A recent Geneva report on the world economy argues that to answer this question, we need to reconsider how monetary and fiscal policies work and are effective together when both have limited policy space. The authors bring the classical theory of the “policy-mix”, half-forgotten during the era of inflation targeting monetary policy, back on the table, and highlight key lessons for the 21st century. In this first edition of the Chair Banque de France Policy Panel, the authors of the report discuss their conclusions for monetary-fiscal policy coordination in Europe with experts in the field. 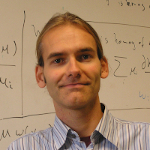 Tobias Broer is a Professor at the Paris School of Economics and at the University Paris 1 Panthéon-Sorbonne, and Research Affiliate at CEPR. He is also the Director of the Banque de France - PSE Chair. Before joining the Chair, he worked at the Bank of England, the Central Bank of Chile, and Stockholm University. His work focuses on Macroeconomic Theory and International Macroeconomics and has been published in major international and European academic journals. 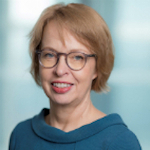 Elga Bartsch, PhD, is Head of Economic and Markets Research at the BlackRock Investment Institute. She is also a member of the ECB Shadow Council and a trustee of the IFO Institute for Economic Research. She was previously Global Co-Head of Economics and Chief European Economist at Morgan Stanley in London. She has more than 20 years of macro research experience, and has served on and chaired the Economic and Monetary Policy Committee of the German Banking Association. 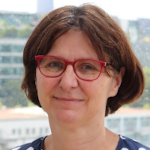 Agnès Bénassy-Quéré is a Professor of Economics (on leave) at University Paris 1 Panthéon-Sorbonne and at the Paris School of Economics. She has been serving as Chief Economist of the French Treasury since 2020. Previously, she worked for the French Ministry of Finance, before moving to academic positions at the universities of Cergy-Pontoise, Lille II, Paris-Ouest and Ecole Polytechnique. She is a member of the Bruegel board and a CEPR Associate Fellow. 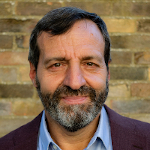 Giancarlo Corsetti (Ph.D. Yale, 1992) is Professor of Macroeconomics at Cambridge University, fellow of Clare College, and theme coordinator in the Cambridge INET Institute. He has previously taught at the European University Institute in Florence, as Pierre Werner Chair, and the Universities of Rome III, Yale and Bologna. He is a leading scholar in international economics and open macro with pioneering contributions on currency, financial and sovereign crises, monetary and fiscal policy in open economy, and the international transmission and global imbalances. He is a research fellow of the Centre for Economic Policy Research, where he served as co-director of the International Macroeconomic Programme between 2004 and 2015. 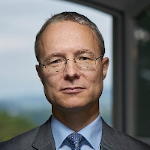 Dirk Niepelt is Director of the Study Center Gerzensee, Professor at the University of Bern, President of the Swiss Society of Economics and Statistics and Research Fellow at CEPR. Prior to joining the Study Center, he was Assistant Professor at the Institute for International Economic Studies (IIES) at Stockholm University. His research and teaching covers macroeconomics, international economics, and public finance, and he frequently contributes to the public debate. 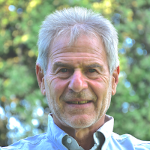 Charles Wyplosz is Emeritus Professor at the Graduate Institute in Geneva where he was Director of the International Centre for Money and Banking Studies. Previously, he has served as Associate Dean for Research and Development at INSEAD, as Director of the PhD program in EHESS and as Policy Director of the CEPR. His main research areas include financial crises, European monetary integration, fiscal policy and regional monetary integration. He has served as consultant to many international organizations and governments and is a frequent contributor to public media.