In addition to the contributions of Daniel Cohen and Claudia Senik, this edition brings together contributions from several PSE researchers: 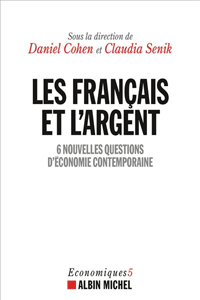 Here is a masterly synthesis of French social practices that challenges many preconceived ideas. The context? The French are more pessimistic than other Europeans. Why is this? Obviously because of their distrust of institutions and society. The result? Their private happiness depends, more than elsewhere, on their personal wealth.

The various contributors to this book examine the relationship between money and the French, their generosity towards charities and their relationship to taxes. They also broaden the scope of the analysis of our behaviour by describing the way in which couples coordinate to manage their transition to retirement. They decipher the very particular world of football, illustrated by the amount of player transfers which reach new records every season, and note the fragmentation of the world of work, of which the polarisation of jobs is the most visible expression. Beyond the strictly economic approach, this ambitious picture of new research in progress helps to better understand French society and the world around it.

Claudia Senik is Chair Professor at the Paris School of Economics and Professor at Sorbonne University. She iis the Director of the Welfare Observatory at CEPREMAP. She is a member of the Institut Universitaire de France and an associate researcher at the IZA. She works on the economics of well-being and especially on the link between income, growth, inequality and happiness. She has published several books including : « Le Bien-être au travail - ce qui compte » (Presses de Sciences Po, 2020), « L’économie du bonheur » (le Seuil, 2014) and co-edirected « Crises de confiance ? » (La Découverte, 2020) and « Les français, le bonheur et l’argent » (Rue D’Ulm, 2018).