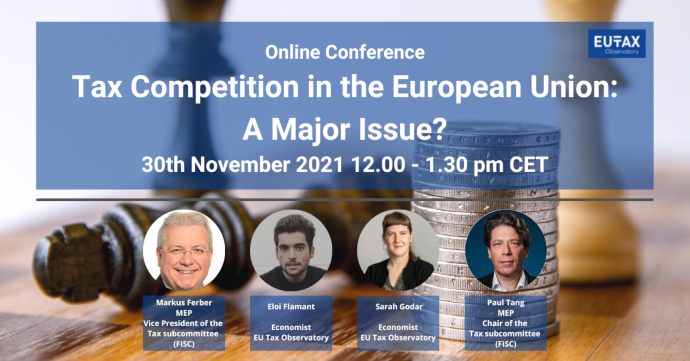 The EU Tax Observatory* is pleased to invite you on November 30th to an online conference: “Tax Competition in the European Union: A Major Issue?”.

Tax Competition in the EU - A Major Issue?

12:05pm – 12:25pm: Presentation of the results of the EU Tax Obseravtory’s last report : “New Forms of Tax Competition in the European Union – An Empirical Investigation“ report

Eloi Flamant is working on a key mission of the Observatory: tracking the special tax schemes that exist in EU member states and that fuel tax competition (such as reduced rates for wealthy individuals, athletes, retirees, etc) as well as corporate tax competition.

Paul Tang is a Member of the European Parliament for the Partij van de Arbeid (PvdA) since July 2014, as part of the Group of Socialists and Democrats. He received a PhD in Economics from the University of Amsterdam and worked for the Dutch ministry of Economic Affairs and the Bureau for Economic Policy Analysis before entering the Dutch parliament in 2007.

In 2014, Paul Tang led the list of the PvdA for the European elections. In 2019 he was re-elected. Paul Tang mainly works on economic and financial affairs (ECON), with a focus on fair taxation and sustainable finance, and the role of data in our society (LIBE). Since September 2020, Tang is chair of the subcommittee on taxation (FISC).

The online conference will be moderated by Jan Strupczewski (Reuters).

* The EU Tax Observatory was created in 2021 at the Paris School of Economics, thanks to funding from the European Union. Under the direction of Gabriel Zucman, the EU Tax Observatory is hosted at PSE and aims to conduct and disseminate innovative and high quality scientific research on EU taxation, as well as to stimulate exchanges between the scientific community, civil society and policy makers.