Home > News > Jean-Olivier Hairault takes up his position as the director of the Paris (...)

(Press Release) January 23, 2019 - At the end of an international recruitment process, led by an ad hoc committee, Jean-Pierre Danthine, president of the PSE Board of Directors has named Jean-Olivier Hairault to head the foundation. He takes up the position in January 2019, succeeding Pierre-Yves Geoffard, whose mandate expired at the end of December.

A PROFESSIONAL ATTACHMENT TO PSE SINCE ITS CREATION 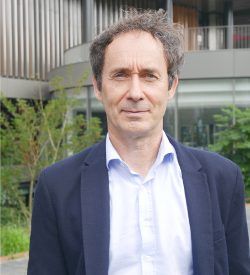 Jean-Olivier Hairault has been professor of economics at PSE since it was established in 2006, and at the University of Paris 1 Panthéon-Sorbonne since 1997. Prior to that, he was maître de conférences at Paris-Dauphine between 1992 and 1993, then professor at the University of Lille 1 from 1993 to 1997. He was also a member of the Institut Universitaire de France between 2003 and 2008.

At the Paris School of Economics, Jean-Olivier Hairault has worked tirelessly to promote the cohesion of the scientific community that emerged from the original association of a number of grandes écoles (EHESS, ENS, Ecole des Ponts ParisTech), a university (Paris 1), and two national research institutes (CNRS, INRA). In spring 2015, Pierre-Yves Geoffard entrusted him with management of teaching programmes. He led the reorganization of the Masters courses certified by PSE and the creation of the PSE Summer School, which in three seasons, has welcomed around 450 students and professionals from around the world. He also organised the launching of a new Masters of Science, « Economic Decision and Cost Benefit Analysis » oriented towards the great investments of the future.

Macroeconomist, specialist in economic cycles and their stabilisation, as well as unemployment and retirement, Jean-Olivier Hairault is committed to applied modelling and is strongly involved in debates about economic policy. He has published in top-ranking international journals. In the course of his research, he has also published several works for a general readership, and has written or co-written, for the Conseil d’Analyse Économique and the CEPREMAP, noted reports on the retirement reforms and employment policies for seniors. He was economic counsellor to the minister of the Economy and Finance, Pierre Moscovici, from 2013 to 2014.

His nomination comes at a time when the institution has acquired a strong reputation in the academic community and has been placed, since 2012, in the top ten economics departments in the world. His plan is to consolidate the original scientific position of PSE, which extends economics by pushing forward the frontiers of knowledge and constructing linkages with other disciplines. To achieve these ends, Jean-Olivier Hairault will embark on an ambitious policy of recruiting and keeping researchers at PSE. He also intends to engage PSE more closely in the great problems that face society today, including climate change and the energy transition, transformations in the social model, growing inequality, artificial intelligence and its social challenges, the ageing of the population, and the organisation of international trade and the monetary system.

This change in direction also signals a renewed ambition in terms of relationships with firms, especially through partnerships based in new research chairs, the launching of a training programme designed for managers, and the creation of dedicated meetings between economists from the academic and professional worlds. The desire to convince world-class companies to analyse and to refine their strategies through dialogue with scholars who defend independent research that is innovative and of top international quality, will be at the heart of PSE’s development in the coming years.

The Paris School of Economics (PSE) is the top economics research centre (1) in France and in Europe. It develops economics research at the highest international level and disseminates the results. It brings together a community of nearly 140 researchers and 200 doctoral candidates, and offers teaching, in Masters and PhD courses and a summer school, all at the cutting edge of the discipline. Founded by the CNRS, the École des Hautes Études en Sciences Sociales, the École Normale Supérieure, the École des Ponts-ParisTech, the INRA, and the Université Paris 1 Panthéon Sorbonne, PSE includes in its project private and institutional partners in order to build up the dialogue between scholarly research and the socio-economic world. www.parisschoolofeconomics.eu