The International Macroeconomics Chair has the pleasure to invite you to a lecture given by Kenneth Rogoff (Harvard University) on June 10, 2022, at Paris School of Economics.

In recent years, the zero bound on nominal interest rates has significantly impinged on central bank’s most powerful instrument. Going forward, competition from digital currencies – both private and foreign state-issued, threatens to significantly disrupt the payments system. At the same time, many central banks are under enormous pressure to deal with environmental and social issues, where they have neither the political legitimacy nor the toolkit to adequately address.

This paper considers a range of innovations to strengthen, and in some cases rebuild, independence. These range from preparing to strengthen instruments for fighting deflation to bolder and more constructive regulation of digital currencies, to re-establishing dividing lines between the responsibilities of monetary and fiscal policy. Any robust policy framework needs to account for issues of credibility and political economy which have been far too ignored in recent academic analyses of macroeconomic policy. 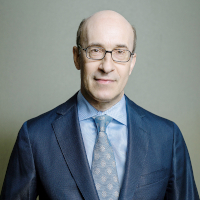 Kenneth Rogoff is Maurits C. Boas Chair of International Economics at Harvard University. He is particularly known for his seminal work on financial crises, exchange rates and on central bank independence. Together with Maurice Obstfeld, he is co-author of Foundations of International Macroeconomics, a treatise that has also become a widely-used graduate text in the field worldwide. His widely-cited 2009 book with Carmen Reinhart, This Time Is Different: Eight Centuries of Financial Folly, shows the remarkable quantitative similarities across time and countries in the run-up and the aftermath of severe financial crises. His monthly syndicated column on global economic issues is published in over 50 countries.

From 2001–2003, Rogoff served as Chief Economist at the International Monetary Fund. He is an elected member of the National Academy of Sciences, the American Academy of Arts and Sciences, and the Group of Thirty, and a senior fellow at the Council on Foreign Relations. Rogoff is among the top ten on RePEc’s ranking of economists by scholarly citations. He is also an international grandmaster of chess.