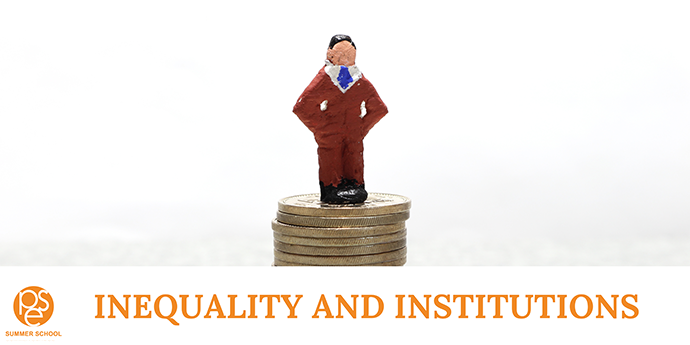 Institutions and social frictions, associated with inequalities, political conflicts, corruption, and cultural polarization, have emerged as central topics of economic research. This course first takes stock of existing work and then outlines the current research frontier. How do we interpret recent trends in inequality, including in low- and middle-income countries ? How do changes in inequality interact with changes in the political landscape ? How do understudied informal institutions, such as identities and customs, interact with formal institutions ? How does the media, and varieties thereof, shape political accountability ? And how do social frictions shape violent conflict ?

The program approaches these questions by drawing on formal theory and rigorous empirical research in two core modules : « Inequality and development » and « Models of Cultural Dynamics and Social Identity ». In addition, three shorter modules develop empirical applications of the core course themes. These modules cover the role of political cleavages, civil conflict, corruption, and media in economic development. The objective of the program is to equip you with the background and tools you need as a researcher to contribute to this dynamic field.

Research lab We will organize daily research lab sessions. In these sessions, you will work on a research proposal in a small group of students with shared interests. We will provide feedback and guidance to help you develop your proposal over the course of the week. At the end of the program, you will have the opportunity to present your project to our faculty.

Health measures The program will follow all relevant health guidelines.

Overview Inequality has become a hot topic in politics, economic research and policy. This is true both in developed and in developing countries. This is also true at the global level, as shown by the emphasis on the fight against global poverty in the Sustainable Development Goals, which succeeded the Millenium Development goals. This concern for inequality may obey various motivations : social justice, political stability and economic efficiency. The ambition of this course is to review what economists have to say on these various aspects of inequality by addressing the following set of questions. Is it true that inequality is rising everywhere ? Is too much inequality detrimental to economic development ? What kind of inequality ? Through which channels ? How much is ’too much’ ? Which instruments and which policies can reduce inequality ? What is the political economy of these policies and possible tradeoffs behind them ? The recent literature on inequality is voluminous, even when dealing with the relationship between inequality and development. This course intends to provide a general view of that literature. It focuses more on the deep lessons to be learnt from it in terms of knowledge and policy implication than on purely technical aspects of it. On this basis, it identifies key areas of future research.

Kanbur, R. (2015), « Globalization and Inequality », in Atkinson, A. and Bourguignon F. (eds), Handbook of Income Distribution, Volume 2b, Chapter 20, Elsevier.

Lakner, C and Milanovic, B, (2015), « Global Income Distribution : From the Fall of the Berlin Wall to the Great Recession », World Bank Economic Review.

Overview Cultural dimensions, ethnic identity and social norms are increasingly recognized as important evolving factors in economic development. They are also acknowledged to contribute and interact with the political economy of development policy and conflicts. This part takes stock of existing economic research on identity formation and cultural change, and their connections to conflicts and governance and institutional issues. We present recent theoretical advances on these issues, and their applications to specific development contexts. This course offers theoretical foundations for the more applied modules on corruption, institutions, and civil conflict.

Mc Elreath R. and R. Boyd, (2007), « Mathematical Models of Social Evolution : A Guide for the Perplexed », The University of Chicago Press, USA.

Bisin, A. and T. Verdier, (2011), « The Economics of Cultural Transmission and Socialization » in the « Handbook of Social Economics », J. Benhabib, A. Bisin and M. Jackson (eds), North Holland.

Bisin A. and T. Verdier, (2017), « On the Joint Evolution of Culture and Institutions, » NBER Working Papers 23375, National Bureau of Economic Research, Inc.

Overview Income and wealth inequalities have increased substantially in many regions of the world since the 1980s. This evolution followed a relatively egalitarian period from 1950 to 1980, accompanied by inclusive growth and the expansion of welfare states. Yet, this reversal has not led to wide-spread demands for redistribution or the revival of class conflicts. The past decades have seen instead the rise of various forms of identity-based politics, embodied by the Brexit vote and the success of identity parties in Europe, Donald Trump in the United States, Jair Bolsonaro in Brazil, and Narendra Modi in India. What explains this remarkable transformation ? Why have so many democracies left growing inequalities un-checked and shifted to debates over immigration, national identity, and integration ? This part of the course will review recent contributions to our understanding of these important issues by studying the interplay between social inequalities and the long-run evolution of political cleavages in the western and non-western world.

Overview Over the past decade the economic literature on corruption has seen a remarkable revival related to economists’ ability to measure corruption and to identify its effects and causes. This part of the program will review important recent contributions to our understanding of corruption in developing countries, focusing on measuring and quantifying corruption, identifying its efficiency consequences and its determinants. We will pay special attention to media as determinant of corruption and accountability.

Structure 1. Corruption : Measuring corruption, it’s effects and determinants 2. Media and accountability 3. Background theory for both parts of the course

Durante R. and E. Zhuravskaya, (2017). « Attack When the World is Not Watching ? International Media and the Israeli-Palestinian Conflict ». Journal of Political Economy.

Overview Many of the world’s poorest countries are suffering from or recovering from civil wars. Development policies need to be adapted to these environments, and they often aim directly at reducing or preventing conflict. However, the study of conflict had received relatively little attention in development economics until recently. This short, three-hour lecture offers a concise introduction to the fast-growing literature on conflict and economic development. The focus of this course is on empirical work, and it complements the course of Thierry Verdier - which covers some of the most influential theories of conflict. We discuss key empirical findings and ongoing debates, emphasizing how research on this topic can inform policy approaches to conflict.

Structure 1. The consequences of war a. Human development b. Cooperation in post-conflict settings 2. Causes of war a. Ethnicity, inequality, and polarization b. Economic shocks 3. Information and civilian participation in war 4. Political institutions and civil war 5. Interventions in conflict zones a. Development interventions b. Military interventions