Home > Economics for everybody > Archives > 5 papers...in 5 minutes ! > December 2015 > Atlantic versus Pacific Agreement in Agri-food Sectors: Does the Winner (...)

Atlantic versus Pacific Agreement in Agri-food Sectors: Does the Winner Take it All? 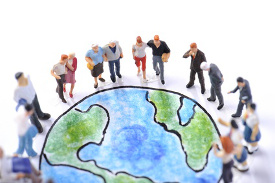 At the beginning of October 2015, twelve countries in the Pacific announced the conclusion of a trade agreement, the Trans-Pacific Partnership (TPP). Since 2013, the European Union and the United States have been negotiating a similar deal, the Transatlantic Trade and Investment Partnership (T-TIP). These agreements, of massive proportions (each involving 11.5 per cent of the global population, and 38.5 and 45.8 per cent of global GDP respectively), are aimed at a market integration that goes well beyond a simple dismantling of tariff barriers. While many political decision-makers place great hopes in these agreements, a citizen opposition is forming against them. Their fears especially concern the risk of a lowering of health and environmental norms. For example, because of its relatively small part in global production and employment, agriculture is one of the particularly sensitive fields in the negotiations. So, do these agreements represent a risk or an opportunity for global agri-food trade?

In this article, Disdier, Emlinger and Fouré simulate, with the help of a model of computable general equilibrium model (1), the effects that the two agreements could have on levels of trade and production. While earlier analyses have tended to focus on one agreement or another, these authors explicitly compare the two. They use the precise bilateral protection measures applied by each import country on each product and towards each of their partners. The effect of the norms and their co-ordination is also taken into account through tariff equivalent calculations. The results suggest that the two agreements lead to a greater volume of agri-food trade between member countries. The effect on the global level should be comparably greater (in volume, 31 billion US dollars more than if the accord were not in place). The US would be the greatest winner, because they have already applied lower tariffs and they specialise in sectors often subject to multiple norms by partner countries. Moreover, their export gains should be greater in the context of the T-TIP than in the TPP. In relation to agri-food production, these trends are again relatively similar: American production should grow while that of most of their partners should contract. For the EU, the increase of agri-food exports to the US should be in large part compensated for by a reduction in intra-European exchange, which in the end, should lead to a small reduction in European agri-food production. Finally, the authors ask about the impact of the Trans-Pacific Partnership on European countries. It will depend on the actual shape of agreement. The alignment of norms should significantly reduce European agri-food exports to the US because of increased price competition. However, an agreement reached between a greater number of countries than the October 2015 signatories, especially with China, India and South Korea, should have scarcely any negative effect on European exports and could even increase them in certain sectors. This latter result is explained by a relatively complementary specialisation between the countries of the EU and the potential additional members of the Trans-Pacific Partnership. This article focuses on the agri-food sector, but the agreements will cover the whole of the economy: some of the losses seen in that sector could be compensated for in the manufacturing and services sectors.

(1) The MIRAGE model deveoped by the CEPII