How Do Central Bank Governors Matter? Regulation and the Financial Sector. 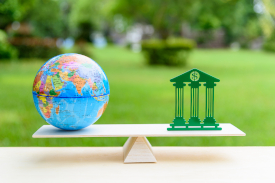 Central bank governors (presidents or chairmen) play a pivotal role in decisions about economic policy, even when they are part of a board or committee, and even when central banks are not fully independent. For example, in his role as chairman of the Board of Governors of the Federal Reserve, Paul Volcker is famously responsible for changing the conduct of monetary policy in the United States in the 1980s. Volcker’s credibility, bolstered by his experience in the financial sector and the U.S. Treasury Department, was key for his success in reducing inflation. However, the role of heads of central banks extends well beyond controlling inflation, and covers financial regulation. In fact, two thirds of central banks worldwide regulate their banking system, while almost one fourth regulate securities and insurance markets. In these cases, central banks not only determine the implementation of regulation, but also influence the legal and regulatory environment.

In order to address these questions, the authors construct a new dataset with detailed information on the personal professional histories of the universe of central bank governors over the period 1970-2011. The data suggest that about 20 percent of central bankers have previous experience in the financial sector; about a quarter are employed by the financial sector after their tenure ends.

In addition to the main finding, the paper demonstrates that experience in the International Monetary Fund is associated with faster financial deregulation; this is consistent with “Washington Consensus” shaping their preferences. In contrast, governors’ experience at the United Nations and at the Bank of International Settlements is associated with less deregulation; the latter is consistent with the macro-prudential role of the BIS.

The paper suggests important policy implications. On one hand, if the goal of the country’s government is to implement deregulation, this may manifest itself in the choice of a central bank governor with experience in the financial sector that can facilitate implementation. On the other hand, in cases where the choice of the central bank governor does not take into account past experience, financial deregulation may be an undesirable outcome. The results strengthen the importance of considering the background and past work experience before appointing a central bank governor, as Christina Romer (herself a previous chairwomen of the Federal Reserve) advocates, while shifting the focus from inflation to financial regulation.

Original title of the article: “How Do Central Bank Governors Matter? Regulation and the Financial Sector”

Published in (forthcoming): Journal of Money, Credit and Banking