The effect of language training on immigrants’ economic integration: Empirical evidence from France 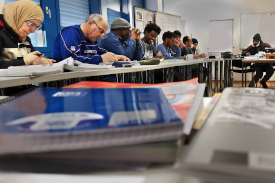 Immigrants often represent the most vulnerable fringe of the labor force and France is no exception. In the mid-2000s, the French government introduced a series of policies aimed at improving the economic and social integration of immigrants and at providing immigrants the dignity guaranteed by the Universal Declaration of Human Rights. Since the 1st of January 2007, every new legal immigrant to France who is older than 16 and is coming from a country outside the European Union (EU), has to sign a “Reception and Integration Contract” (Contrat d’accueil et d’intégration, or CAI). This contract imposes a civil training (e.g., on French institutions and the values of the French Republic), a language training, an information session on life in France and provides a statement of professional competence. On the 1st of July 2016, the French Government modified some aspects of these integration policies through a new integration plan called the “French Republic Integration Contract” (Contrat d’intégration républicaine, or CIR).

Lochmann, Rapoport and Speciale (2019) find that the number of hours of language training significantly increases labor force participation, especially for individuals with higher levels of education. The effect does not appear to be statistically different by age, gender or type of migration. Furthermore, the language classes do not significantly increase the probability of employment. The latter finding however needs to be interpreted with caution because the data do not allow for analyzing long run effects.

The authors explore different mechanisms that may explain the effect of language classes on labor force participation. They find little evidence for a signaling effect of the diploma received after the end of the language classes, for an increase in the size of the network and for an information effect related to access to welfare benefits. With regard to the main mechanism – the mere language channel – their estimates show evidence of an improvement in objective oral language skills for immigrants whose native language is not too distant from French (i.e., up to the 42nd percentile of the linguistic distance distribution). They also uncover negative behavioral effects that may derive from disappointment from the integration plan. Finally, the information on job search strategies that individuals derive from the time spent with classmates and teachers during the classes appear to be an important channel as well, which helps immigrants to better integrate into the French labor market...................