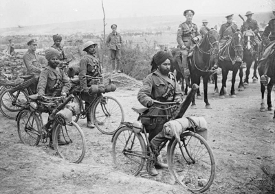 The contribution of the Indian Army to WWI is often overlooked, but there is probably no better illustration of World War I’s global dimension than its victims in the colonial armies. Raw figures help to appreciate the enormous scale of India’s war-time recruitment. It is easy to understand why the British Government of the time was keen to rely on the Indian Army: colonial India was home to a formidable source of potential recruits (1). Yet, there were vast differences in regional recruitment patterns. In 1918, more than 40% of the Indian army came from one Province that accounted for less than 8% of the Indian population: Punjab (2). Even within Punjab, geographical recruitment patterns were far from uniform, and they reflected long-established preferences of British recruiters for particular villages. What happens if more than 30% of working age men are suddenly sent on military campaigns far from home? Most Indian soldiers were voluntary recruits from small rural villages and could not read or write before they joined the army. Death, illness, injury, and psychological trauma were clearly risks that shaped the war experience of Indian soldiers. But, for a subset of soldiers, serving in a professional army provided opportunities to acquire new skills. In this article, Oliver Vanden Eynde uses information from census records to estimate the impact of military recruitment during the First World War in Punjab on the literacy rates. He estimates recruitment patterns in the religious communities of each Punjabi district based on casualty records of more than 19,000 soldiers that are maintained by the Commonwealth War Graves Commission. The detailed information in these records on the name of the victim and of his father enabled the author to identify the religious group of each soldier and the district in which he was born. He uses the strong variation in religion-specific regional recruitment rates to assess whether military service can explain changes in literacy after the war. His analysis confirms that, between 1911 and 1921, literacy rates and numbers increased significantly in heavily recruited communities. This effect is strongest for men of military age, which is consistent with the hypothesis that soldiers learned to read and write on their foreign campaigns. These effects are striking given the underinvestment in public education at the time. This finding is consistent with historical work that emphasises how military service provided an environment in which the personal returns to education were boosted, in particular through the ability to communicate with one’s family. Clearly, war-time military service is no substitute for formal education. This could explain why there is no conclusive evidence in this research that children in heavily recruited communities became more literate – the improvements appear to be driven by men of military age. Yet, NGOs and researchers have found that adult literacy is notoriously hard to improve even today. Military training still constitutes one of the most important areas of international cooperation. And, contexts of underinvestment in human capital have not lost their relevance either in the 21st century: analysts estimated in 2008 that that more than 80% of the Afghan army recruits were illiterate. In such environments, Punjab’s WWI experience could point at unintended benefits of military service. Still, writing in a period that is marked by the 100th anniversary of the Great War, it seems fitting to emphasise that Punjab’s human capital accumulation after the war came at a terrible cost: for every 6 additional literate men, one Punjabi soldier gave his life..............(1) The subcontinent sent almost 1 million men to front lines across the world to fight the Central Powers, and 138,000 Indian men were sent to France in particular(2) Colonial Punjab (and its Princely States) comprises the present-day “Punjab” states in Pakistan and India, as well as the states of Himachal Pradesh and Haryana in India......................Original title of the article : “Military Service and Human Capital Accumulation: Evidence from Colonial Punjab”Accepted for publication: Journal of Human ResourcesAvailable at : https://www.parisschoolofeconomics.eu/docs/vanden-eynde-oliver/military-service-colonial-punjab.pdf......................© “Indian bicycle troops Somme 1916 IWM Q 3983” by John Warwick Brooke - This is photograph Q 3983 from the collections of the Imperial War Museums.. Licensed under Public Domain via Wikimedia Commons