Home > Economics for everybody > Archives > 5 papers...in 5 minutes ! > May 2017 > Modelling Heterogeneity in the Resilience to Major socioeconomic Life (...)

Modelling Heterogeneity in the Resilience to Major socioeconomic Life Events

Short link to this article: http://bit.ly/2qxTBy9 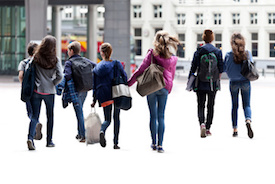 In psychology, the notion of resilience refers to an individual’s capacity to cope with stressful events such as divorce, being fired, or accidents. A resilient individual will be better prepared to navigate in an uncertain and fluctuating economic and social environment that creates ruptures from which one must be able to “bounce back” several times in the course of a professional and emotional life. It is thus important to know what factors can create a capacity for resilience in individuals. While resilience is a skill formed during infancy and adolescence, in relation to the social and familial milieu and school, it can also be the object of public policies aimed at correcting inequalities in resilience among children. Though it is a “trait” essentially determined at birth (for example, by genetic and epi-genetic factors), public policy must be used to identify and protect the least resilient adults.

In a study conducted by Paul Frijters, David Johnston and Michael Shields, Fabrice Etilé examines the relationships between the life circumstances of adolescents and resilience in adulthood, with the help of data from the Australian HILDA panel (1). Individual resilience is measured by observing the short and long-term variations in psychological health identified by the SF-36 questionnaire that occur in reaction to negative events (being fired, falling into serious debt, the death of a loved one, divorce, etc.). The more that individuals are affected in the short term by such events, the longer they take to recover from such shocks, and the less resilient they are. The authors show that around one third of individuals are not very resilient, while another third is little affected psychologically by such negative events. They then examine the correlations between this measure of resilience and some variables that characterise the individual and her environment at 14 years old, measured retrospectively. Surprisingly, resilience is very weakly associated with the socio-professional situation of the parents and the family situation at age 14. Thus, divorce of the parents or the death of one of the parents is not correlated with resilience. In addition, significant and positive associations appear between resilience and such personality traits as being closed to experience, emotional instability (neuroticism), extraversion and internal locus of control (2). These results suggest that the capacity for resilience is relatively independent of social and family environment in adolescence, but is more associated with psychological traits that we know are influenced by both genes and the environment. Returning to the issues raised by James Heckman and his colleagues, we can also ask whether only interventions at an early age can effectively change the capacity for resilience that individuals will be able to employ later in their adult lives.

(1) The Household, Income and Labour Dynamics in Australia (2) A personality trait can characterise the behaviours, attitudes and emotions of an individual in comparison to a reference group. Personality traits are measured by questionnaires developed and validated by psychometric procedures. A person has an internal locus of control when he believes that what happens to him is determined above all by himself and not by external factors. ………………..Original title: « Modelling Heterogeneity in the Resilience to Major socioeconomic Life Events »Published in: PSE Working Papers n°2017-09. 2017Available at: https://halshs.archives-ouvertes.fr/halshs-01485989/document © ARTENS - Fotolia.com