Short link to this article : https://bit.ly/2IY6VVM 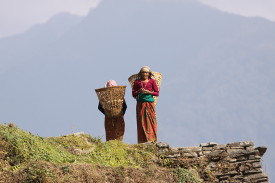 Awareness-raising campaigns about fertility and family planning are widespread in developing countries. The implicit argument underlying many of these campaigns is that having many children impoverishes already precarious households, and even that having children creates a “poverty trap”. A growing number of children means a reduction in everyone’s means, with potential negative effects on the health, education and chances of success in both the short and long term of all members of the household. Simple correlations tend to confirm these arguments. In Nepal, parents who have the most living children live in the biggest households and, on average, have the lowest income per capita. However, lower fertility rates cannot be achieved without a better understanding of the effects of having many children. This is even truer when the household structure is more complex than the simple nuclear family.

In this article, Libois and Somville use household surveys to analyse the link between the number of children, and both structure and size of households in Nepal. For mothers younger than 40, an additional birth leads to an increase a little below the total size of the household –reflecting the absence of some children who have been sent to other families, and also the departure of brothers or sisters of the head of the family – and thus the family per capita income is reduced. Moreover, children cannot contribute to the household income, and the family allowance system in Nepal is barely developed. For older women (1), the relationship is reversed. Women who have few children see the size of their households increase while those who have more experience a significant increase in the number of household members. Put another way, in the second part of their lives, couples with fewer children tend to welcome more grandchildren and in-laws into their households. Couples who have more children see them leave more quickly. This inversion of the relationship between the number of children and the size of the household makes the statistical relationship between the number of children and low per capita income disappear. The authors’ analysis focuses on testing the statistical robustness of the results, for example, to avoid estimates being affected by parental preferences for larger families. The results are coherent with the incentives implicit in the Nepalese system of inheritance, which is divided into two regimes – partition and succession. The most common is the partition regime, where all members of the family own the family property in common. A distribution occurs when one of the children leaves the parental home. The child who leaves the family household to establish his own receives his part upon leaving, knowing that when his parents die, he has no further rights to the property that remains in the family. The children who stay at home until the death of their parents are subject to the succession rules, according to which each child who remains inherits the parental possessions on a pro-rata basis with the other children who stayed (and to the exclusion of those who have already left). The co-existence of these two regimes encourages those born into a large family to leave the family home quickly because the cost of leaving is low while staying implies sharing part of his earnings with his brothers and sisters. In the contrary case, where there are few children in a household, it is relatively more interesting to stay in terms of the inheritance, and less costly in terms of sharing earnings from work. This inheritance system is very different from the succession regime introduced through the civil code in many European countries. Nevertheless, it is close to the “authoritarian family” as described by Emmanuel Todd (2011) (2) or, for example, the system of modified primogeniture, practiced historically in the French Pyrenees (Poumarède, 1979; Augustins, 1989) (3).

(1) In view of the sample’s limitations, the study looks at women aged from 40 to 50 years.(2) Todd created a typology of family systems. The “authoritarian family” is an authoritarian and inegalitarian family system in which the role of the residential and productive entity is preeminent. These family systems tend to maintain household unity by giving a net advantage to a single heir to the detriment of the others.(3) Poumarède and Augustins describe the family system and how the family wealth is traditionally transmitted in the Pyrenees. To perpetuate the household and transmit the inheritance, only the first-born inherits, regardless of their gender. Originally, the younger siblings could not claim any part of the family wealth, but around the fifteenth century, the notion began to appear in contracts of “la legitime”, being a portion put aside for the children who would not formally inherit.......................