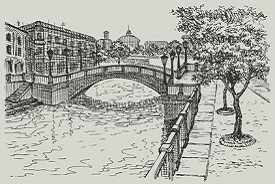 Today, more than one-third of the world’s population still lives in homes without potable water and sanitation systems. This situation, which has undeniable negative consequences for mortality rates, itself results from sustained income inequalities.Using a primary data base containing information about mortality, sewage disposal and incomes (via taxation data) in 80 neighbourhoods of Paris, Kesztenbaum and Rosenthal analyse mortality inequalities from 1881 to 1914.In this article, the authors show that these inequalities were considerable at the end of the nineteenth century: in 1881, an inhabitant of the Madeleine area could hope to live to 58, while his counterpart in Montparnasse could hope to attain only 33 years of age. But, against all expectations, these inequalities increased rather than reduced with the introduction of sanitation systems. Indeed, the sewage disposal system was first introduced in the richest areas, thus increasing their initial advantage. Although in the end, the sanitation system spread all over the city, the delay in bringing it to the poorer quarters took many years to overcome. These findings confirm one of the mechanisms by which wealth, income and social class protect against mortality: better access to collective infrastructure that improves health. This is added to other factors, whether it be greater access to private goods (for example, better nutrition, better housing, access to doctors) or differences in behaviour (for example, better attitudes to health, earlier preventive action). The experience of Paris suggests that there are clear links between marked income inequalities, the slow spread of infrastructure and the persistence of inequalities in health and in life expectancy.......................Original title of the article : “Income versus Sanitation; Mortality Decline in Paris, 1880-1914” Working paper : PSE 2014-26Available at : https://halshs.archives-ouvertes.fr/halshs-01018594......................© Marina - Fotolia.com