Short link for this article: http://bit.ly/1HSOL5I 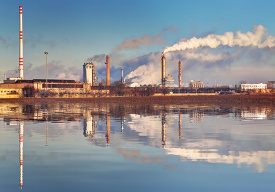 As the COP21 approaches, while the United Nations has renounced the emergence of a single carbon price, a large number of economists have called for “an ambitious and credible climate agreement”, particularly concerning a single carbon price (1). The economic argument in favour of a single price is that it is efficient, requiring all economic agents to align the marginal costs of (de)pollution. An emissions trading system and a tax can both lead to a single price at a given moment, but the two systems lead to very different situations at times of economic shocks. With a uniform emissions trading scheme, i.e. a scheme covering all polluting activities, shocks have no impact on emissions, but do lead to volatility in the carbon price and the marginal costs of (de)pollution. Conversely, a uniform tax leads to volatility in emissions, but stable marginal costs. It seems natural then to pose the question: Could a mixed system, combining tax instruments and emissions trading for some sectors, be more effective than uniform systems, knowing that such a mix would deviate from the idea of a single price? The response is only positive if the tools are applied in a situation of great uncertainty. Since 2008, there has been great volatility in the carbon price in the European Union Emissions Trading System (EU ETS) , which has been particularly affected by the prices of fuel and industrial production in the sectors subject to the EU ETS. In addition, this production has been much more affected by the crisis than has total production (2). This observation raises a second question: What should be the optimal mix of tax instruments and systems of exchangeable quotas?

In this article, Bernard Caillaud and Gabrielle Demange study so-called double control mechanisms which on the one hand specify, before the observation of shocks, which industries are subject to a tax and which others are subject to an emissions trading scheme, and on the other hand fixes the tax rate and the total quantity of emissions traded on the market. Ideally, the first-best possibility is where the marginal costs of (de)pollution are equalised for a marginal social benefit and vary with the shocks: if there is a single price at a given moment, it should vary with random events (3). At the second-best, the quantity of emissions traded and the determination of the parameters of the taxed sector and the sector under the EST respond to several imperatives: on average they replicate the first-best and lead to close fluctuations, even using a mixed system in which there is no single price for all industries. In particular, in the presence of positively correlated shocks – the most pertinent case – a mixed system is most often optimal. Industries whose emissions are the most reactive to shocks are subject to tax in order to reduce variations in their emissions and their marginal costs, the others are integrated into the exchange market, which should be sufficiently large to limit price variations.