A theory of Bayesian groups

Short link to this synthesis: http://bit.ly/2yYVtoC 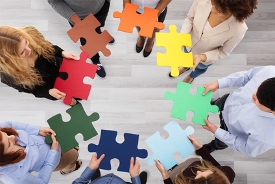 It is standard practice in economics and the social sciences more broadly to rank alternatives from a social perspective: to ascribe preferences or betterness judgments to a group or society as a whole. Less common in social science is to ascribe beliefs – subjective probability assignments – to groups. Yet everyday language routinely invokes group beliefs, not just group-member beliefs: the UK government is said to believe that the Brexit is long-term beneficial, the IPCC is said to believe in certain patterns of climate change, and so on. If group beliefs are to be “rational”, they should change “rationally” in the light of new information. The gold standard for belief revision is, of course, Bayesian revision: the new beliefs should equal the old beliefs conditionalized on the information (Bayes’ rule).