Home > Economics for everybody > Archives > 5 papers...in 5 minutes ! > October 2017 > Globalisation and national trends in nutrition and health: A grouped (...)

Globalisation and national trends in nutrition and health: A grouped fixed-effects approach to intercountry heterogeneity

Short link to this synthesis: http://bit.ly/2yZMPq4 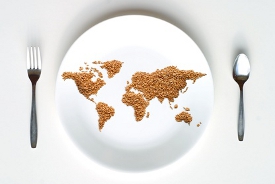 The proportion of adults who are overweight or obese continues to grow at the global level. A study conducted in various countries and published in 2014 in The Lancet (1) states that this percentage went from 29 in 1980 to 37 in 2013. According to the WHO, this increase is mainly due to bad eating habits and low levels of physical activity. Diets rich in sugars, animal products and fats are the greatest risk factors for cardiovascular disease, diabetes and certain cancers. In 2012, cardiovascular diseases, the first cause of death in the world, claimed 17,5 million victims. More than three quarters of these deaths were reported in countries whose per capita income is low or average, which weighs heavily on their economies and public health systems. The WHO considers that chronic ailments linked to eating represent a growing danger for humanity, as well as other older health problems such as malnutrition and contagious diseases. The increase in the number of overweight people and the changes in eating habits coincide with the processes of globalisation. But is globalisation itself responsible for the nutritional changes observed in many countries?

In this article, Disdier, Etilé and Oberlander study the impact of globalisation on eating habits and the preponderance of overweight people, using data covering 70 developed or emerging countries, between 1970 and 2011. Unlike in previous studies, the authors identify the social and economic dimensions of these countries’ openings to the global economy. The results suggest that globalisation has been accompanied by an increase in the consumption of meat and sugar in several countries, and that this is above all linked to the social dimensions of the opening (the exchange of ideas, information and images, and meetings), rather than to commercial exchanges or other economic activities. In other words, since the 1970s, and under the effect of an accelerated globalisation, reciprocal cultural and behavioural influences of eating habits are key to understanding changes on a local level.In addition, the authors analyse the effect of a variation in the degree of globalisation (between one moment “t” and another moment “t+1”) on the variation in nutritional supply and obesity (between these dates). They reveal a relationship between increased globalisation and population weight gain, though this relationship proves not to be significant. This might be because the authors maintained an overview, without taking into account the specificities of each country. Globalisation does not seem then, to be the only explanation of the epidemic of obesity around the world, even if it might play a role in certain countries.

(1) See the 2014 study “Global, regional, and national prevalence of overweight and obesity in children and adults during 1980-2013: a systematic analysis for the Global Burden of Disease Study 2013”, https://www.ncbi.nlm.nih.gov/pubmed/24880830(2) See “Obesity: preventing and managing the global epidemic”, WHO Report (2000) http://www.who.int/nutrition/publications/obesity/WHO_TRS_894/en/