Home > Economics for everybody > Archives > 5 papers...in 5 minutes ! > September 2015 > On the emergence of scale-free production networks

On the emergence of scale-free production networks 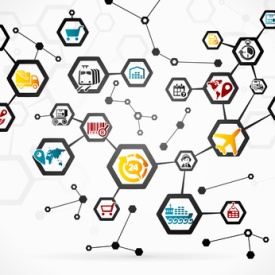 Scale invariance is the property of some objects or phenomena of having the same appearance independently of the scale of observation. Thus, scale-invariant networks look the same at the micro and macro levels. They have been observed in numerous contexts (digital networks, social networks, protein networks, transport networks) and been popularised most notably in the work of physisist Albert-László Barabási.

In this article, Antoine Mandel and Stanislao Gualdi focus on production networks, that is, networks formed by the logistical and trade relationships between firms. Scale invariance in these networks has recently been pointed out as a factor in the emergence and growth of macro-economic fluctuations (1). However, the models of network formation that are built using game theory have trouble explaining the emergence of these scale-invariant networks (also called complex networks). In order to understand their genesis, the authors offer in this article a dynamic model of production network formation. The model is built on the standard model of monopolistic competition (2), supposing that the firms periodically change providers according to changes in their competitiveness. This model allows the replication of the main characteristics of the firms’ demographics and in particular the fact that firms gradually form a scale-invariant network characterised by the appearance of a series of business “hubs” of increasing size. This self-organisation of the production network is explained by the permanent influx of new firms, which drives the model into dynamic disequilibrium, where the size of a firm is determined by its resistance to competition pressures.

This particular network organisation has both advantages and disadvantages. On the one hand, the presence of the hub reinforces the stability and effectiveness of the logistical chains. On the other hand, the risks are insufficiently diversified in the system: shocks affecting the most central firms (for example, those in the finance sector) can be amplified by the network and lead to significant macro-economic instability.