Our (represented) World : A Quantum-Like Object ? 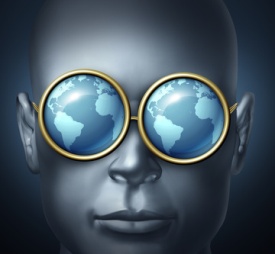 We make our decisions according to our preferences and our vision of the world. Traditional theory says that our vision of the world reflects the information we have. But it is also recognized that human beings have cognitive limits in dealing with information. In particular, we often have difficulty generating a synthetic vision of all the information we receive: we consider one perspective, then another, without always being able to combine them. Some perspectives linked to different aspects of reality seem to present situations that the mind cannot compute. A suggestive illustration of this phenomenon is ambiguous images. We see one image then another, but seeing the two at the same time is really difficult. The incompatibility of data even when they are complementary is a central characteristic of the quantum world, in which this is called “Bohr’s complementarity” after Neils Bohr, founding father of quantum mechanics. Bohr very early had the intuition that this property is pertinent in the cognitive sciences. Over two decades, his intuitions have been taken up, developed and confirmed through a number of experimental and theoretical studies (1); quantum cognition also progressively became known to the general public (2).

In this article, François Dubois and Ariane Lambert-Mogiliansky explore the implications of “Bohr’s complementarity” for learning, that is to say, for the construction of mental images of the world. The learning process is modelled through two operations of the cognitive state that are defined in the mathematical formalism of quantum mechanics. The first operation (preparation of the cognitive state) corresponds to the acquisition of new information, and the second (measuring its value) to its treatment. The authors’ analysis invites us to rethink learning not only in terms of Bayesian updating (3), but also in terms of choice. Indeed, a “quantoid” mind never converges on one single representation of the world. There is no one “real world” but rather several, always leaving room for uncertainty. This also means that we are the creators of our (represented) world, that is, we make choices: what information should we acquire and in what order? These choices have consequences that go well beyond the accuracy of our representations. Thus the authors show that quantum cognition opens new perspectives on the study of choice in conditions of uncertainty.

(1) See Quantum Cognition : a New Theoretical Approach in Psychology » in Trends in Cognitives Sciences July 2015, 19/7 383-393 (2) See the special edition of Sciences et Vie dedicated to quantum cognition in Septembre 2015. (3) That is, the revision of beliefs in the light of new information.