Air traffic and economic growth: the case of developing countries

Short link to this article: http://bit.ly/2dvZ9DG 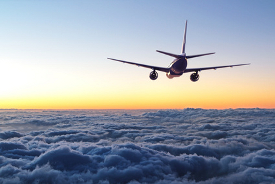 In this empirical article, François Bourguignon et Pierre-Emmanuel Darpeix study and quantify the relationship between air traffic and economic growth. In particular, they try to determine whether the elasticity of air traffic to GDP (2) is stable over time and space, and at different levels of development. While existing studies focus almost exclusively on the more mature markets, Bourguignon and Darpeix use two distinct data bases and different estimation methods to compare systematically the elasticities found in the major developing regions and the OECD group of countries. –. Professional associations highlight an elasticity of air traffic to GDP of around 2: any increase point in GDP is accompanied by a doubling of air traffic. Bourguignon and Darpeix estimate a lower elasticity than that: in fact, a 1 % increases in GDP is associated, grosso modo, a 1.3 % increase in air traffic, and that goes for OECD countries as well as for sub-Saharan African countries. This ratio varies little between the 1970s and the 2000s. Indeed, the authors reveal a remarkable stability in the relationship between economic growth and growth in air traffic over time, but also in space and for very heterogeneous levels of development. For different zones and different eras, the same size economy is associated with the same volume of air traffic. (3) This paper then details more sophisticated techniques for refining the results. In particular, it shows that the relationship that links air traffic and GDP is relatively homogeneous among the major developing regions. Nevertheless, when we take into account the possibility of an autonomous increase in air traffic, then the link with economic growth weakens. Thus, we can no longer reasonably reject the hypothesis that GDP elasticity is equal to one (or, put another way, the hypothesis that air traffic grows at the same rate as GDP), a result that is valid in the short-term as well as the medium-term.

(1) In the case of continent-countries, or where countries are affected by major geographical obstacles such as mountain chains or deserts.(2) Elasticity corresponds to the growth rate of air traffic associated with a one per cent increase in GDP. (3) In other words, while Latin America will reach OECD-level GDP in 2016, its air traffic will also be comparable to that of the OECD in 2016.