Home > Economics for everyone > For a wider audience > 5 papers...in 5 minutes ! > April 2015 > Cost-effectiveness analysis of early access to medical and social care for (...) 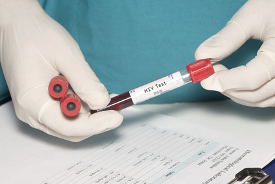 In 2011 in France, 47 per cent of those newly diagnosed as HIV-positive were migrants. This population faces administrative obstacles to accessing medical care which lead, in particular, to significant delays between being infected by the HIV virus, its diagnosis and being taken into social and medical care. Reducing these delays has twin aims, for individual and public health. Access to antiretrovirus treatments, used to delay the progression of HIV in people living with HIV, increases both the quality of life and life expectancy in those treated. In addition, access to antiretroviral treatments for people living with HIV allows greater control of the epidemic because it reduces the number of secondary infections among patients being treated. This study is a cost-benefit analysis of early access to care among migrants living with HIV in France. The model used compares two strategies of early intervention and late intervention among that population, defined respectively as entering into care four and nine months after infection. The model also takes into account the positive effect of antiretroviral treatments on the prevention of HIV through lower transmission rates. In order to compare these strategies, the incidence and prevalence of non-diagnosed HIV in the migrant population in France was estimated taking into account the specificity of the epidemic in that population where infections occur before and after arrival in France.In this article, Guillon, Celse and Geoffard show that early access to care by migrants living with HIV in France would be an effective strategy. Indeed, as well as the individual benefit to the patients being treated, early intervention is beneficial from the points of view of economics and public health. In the scenarios envisaging a reduction in post-screening risk behaviours among infected people, early care access is a cost-saving measure. In the most favourable scenario, the early access strategy generates net savings of 198,000€ compared with later screening through preventing 0.5 secondary infections (1). But early access is also cost-effective in the scenarios that do not include the reinforcement of preventive behaviours among infected people after screening. In the least favourable scenario, early access costs 28,000€ more than late access, and prevents 0.2 secondary infections (2). These results underline the importance of lifting administrative obstacles to the accessing of medical care among the migrant population in France.........(1) That is, for 10 infected migrants, 5 secondary infections are avoided through early compared with late access to care. (2) Representing a cost-effectiveness ratio of 133,000€ per infection avoided.......................Original title of the academic article : “Cost-effectiveness analysis of early access to medical and social care for migrants living with HIV in France”Published in: PSE Working Papers n° 2015-06Available at : https://hal-pse.archives-ouvertes.fr/halshs-01118612......................© Sherry Young - Fotolia.com