Home > Economics for everyone > For a wider audience > 5 papers...in 5 minutes ! > April 2015 > Social Interactions and Malaria Preventive Behaviors in Sub-Saharan (...) 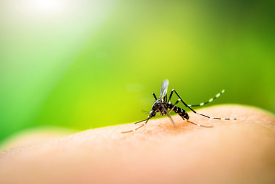 Malaria caused 660,000 deaths in 2010, 80 per cent of which occured in just 14 countries in sub-Saharan Africa, according to the World Health Organisation. Children under five years old and pregnant women are particularly affected by this scourge, because of their low immunity levels. However, there are effective ways to prevent it, among them, the use of mosquito nets (impregnated with insecticide) and intermittent preventive treatment during pregnancy. In this article, Apouey and Picone concentrate on vulnerable populations of young children and pregnant women in sub-Saharan Africa. They investigate whether there are influence effects among individuals in the decision to self-protect against malaria. They wanted to discover if the use of preventive measures by an individual is influenced by their use by that person’s “neighbours” (the latter defined as individuals living in the same area). If influence effects are strong, then mosquito net distribution policies and the promotion of treatment will be more effective because good practices of prevention will spread more quickly within the population. The analysis uses data from the Demographic and Health Surveys and Multiple Indicator Cluster Surveys for 29 countries between 1999 and 2012. The method used was to calculate the social multipliers and compare the effect of a factor at an individual and a social level. The authors found that social interactions are present in the prevention of malaria, linked to the factors of education and wealth of individuals. The interactions are strongly present in relation to treatments undergone by pregnant women and less present in the use of mosquito nets for young children. These conclusions matched expectations to the extent that undergoing treatment, which implies going to a health centre, is a phenomenon with a high social dimension in sub-Saharan Africa, while the use of mosquito nets belongs more to the private sphere. Finally, these results confirming the presence of social interactions in attitudes about prevention are encouraging for public action in the fight against malaria.......................Original title of the academic article : “Social Interactions and Malaria Preventive Behaviors in Sub-Saharan Africa”Published in: Health Economics, volume 23, issue 9, pages 994-1012Available at : http://halshs.archives-ouvertes.fr/halshs-00940084......................© auimeesri - Fotolia.com