Home > Economics for everyone > For a wider audience > 5 papers...in 5 minutes ! > December 2015 > Illegal Immigration and the Shadow Economy

Illegal Immigration and the Shadow Economy 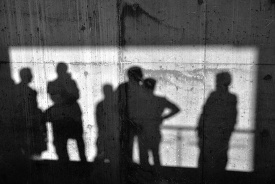 In this article, Camacho, Mariani and Pensierorso choose a different perspective and approach the specific question of clandestine workers in host countries. They study the incentives that render illegal immigration attractive and convenient for both potential migrants and local firms. In their decisions to emigrate, potential immigrants are responding to wage differentials between their countries of origin and host countries, taking into account not only their future status but also the costs linked to emigration and possible deportation. These two costs are of a different nature. The cost linked to emigration is purely financial, while the cost of being deported includes the possibility of legal punishment as well as the social stigma that a return to the country of origin would bring upon the migrant. On their side, firms choose between legality and illegality. The choice depends not only on the availability of illegal labour but also on taxes, production differentials and the costs of detection. In this context, illegal immigration and the informal employment sector can feed one another: a “strong” informal sector can encourage illegal immigration, while the presence of a great many illegal immigrants can reinforce the incentives for firms to enter into illegality. One of the major conclusions in this article is that tax reductions can be used jointly with border controls to reduce illegal immigration. A government wishing to reduce illegal immigration is not limited to using only border controls, but can also increase controls in companies in order to reduce informal activity, and can reduce taxes so that they are not an incentive to have recourse to the informal economy. In a final section, Camacho, Mariani and Pensierorso compare three types of decision-makers according to their attitude towards illegal immigrants and calculate the optimal rate of taxation for each case. The first decision-maker, called an altruist, takes into account the well-being of legal workers (national or not) as well as of illegal immigrants. The second, the classic decision-maker, thinks only about the well-being of legal workers. For the last, called the “xenophobic decider”, illegal workers constitute a source of ill-being. Under some hypotheses, the authors show that the altruistic decider fixes the lowest rate of taxation, because he or she prefers to welcome the least number of illegal immigrants, but in the best conditions.