Short link to this article: http://bit.ly/2uIPC4S 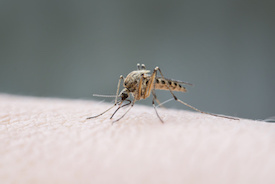 Malaria is transmitted to humans by the bites of certain species of female Anopheles mosquitoes infected with Plasmodium parasites. While there are methods for preventing, detecting and treating this disease, malaria remains one of the principle causes of infant deaths in sub-Saharan Africa. To prevent infection, the Global Malaria Action Plan recommends that inhabitants of affected zones sleep under mosquito nets treated with insecticide. Another strategy in the fight against malaria that has proved effective is indoor residual spraying (IRS) of walls with insecticide. IRS is generally carried out in the context of campaigns run in predetermined zones.

In this article, the prevalence of malaria is measured one to two years before the individual use of mosquito nets, and the specific characteristics of the different zones are taken into account. Moreover, the authors seek to eliminate the possible influence that the communication campaigns can have on individual prevention behaviour, and to correct for possible errors of measurement of prevalence. The data they use combine information on individual prevention behaviour, the socio-economic profile of households, the prevalence of malaria in the area, and rainfall and temperature statistics, for nine sub-Saharan African countries at the beginning of second decade of this century. Analysis shows that IRS and mosquito net use are in complementary relationship. As well, the drop in the prevalence of malaria generates a less than proportional reduction in the use of mosquito nets. If the reduction had been more than proportional, then the task of lowering the risk of malaria infection would have been more onerous. Thus, the results are encouraging for the battle against malaria.