Short link to this article: http://bit.ly/2mIEDnN 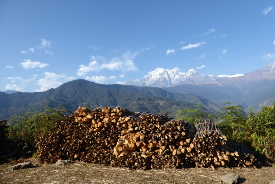 As 21 March approaches, United Nations International Day of the Forest, the question of the link between economic growth and the degradation of the environment arises yet again, in a crucial way. With an exit from poverty for millions of people living in the Himalayan foothills, should we expect the disappearance of the forests that cover them? How can we understand the threats to forest eco-systems and manage them better, in a context in which the benefits linked to forests are local (in the form of income for the neighbouring communities), regional (such as a reduction in erosion and thus in the level of sedimentation in the Ganges basin), and global (from the point of view of climate change)? Where are the glimmers of hope, even paths to solutions for preserving these green lungs between India and China, but also elsewhere in the world?

In this article, Jean-Marie Baland, François Libois and Dilip Mookherjee look at one of the major causes of deforestation in a number of developing countries: the household collection of firewood. They analyse the relationship between forest cover in the Nepalese Himalayas and economic growth in rural areas, around three axes. First, the authors combine satellite imagery and household surveys to show that the collection of firewood is strongly associated with the degradation of forest cover in the Nepalese Himalayas. Second, they show that the marked increase in income – and the reduction of the poverty rate by more than 40 per cent – between 1995 and 2010 is positively correlated with the collection of firewood and thus the degradation of the forests. This effect also does not take into account the real change to forest cover since it has a tendency to stablise over the period, even to increase slightly. The article thus brings to light the importance of analysing the nature of growth and its effect on the structure of household occupation. If income growth comes from an intensification of traditional agricultural activities, then it reduces forest cover. On the contrary, if the income growth comes from a change in occupational structures, through a reduction in time spent in traditional agriculture, the development of non-agricultural economic activity, requiring more formal education, then we can expect a reduction in pressure on the forests. In this case, energy needs are met more by fuels less linked to forests, such as LPG, kerosene, fuel oil and biogas. Third, the authors show that in the absence of any regulation, nothing will slow the degradation of the forest. We might think that, collecting time increasing – and thus also the implicit cost of heating wood, households will reduce their consumption of wood, leaving the forest time to regenerate. In reality, there is no automatic adjustment mechanism between collection time and forest condition. In Nepal, the consumption of wood is not very sensitive to its implicit price (i.e., the time it takes). Baland, Libois and Mookherjee send a double message about the link between poverty and the environment. More than economic growth, it is the nature of that growth and its link to household behavioural habits that matter in understanding the relationship between an exit from poverty and the direct impact that rural households have on their environment. In addition, even in a context of growth, the future of the Himalayan forests cannot be envisaged in a local and deregulated dynamic because the automatic stablisation mechanisms of the forest cover are too weak. Nepal has thus put in place a massive programme of alternative energy sources, with biomethanation in first place as well as one of the biggest projects of decentralisation of forest management from the central government towards village communities (1).

(1) These programmes are currently being analysed by Jean-Marie Baland, François Libois and Subhrendu Pattanayak, and will be the subject of a publication at the end of 2017, beginning of 2018.